WAKE UP TO NEW HEIGHTS

A VACATION AMONGST THE MOUNTAINS. RIGHT NEXT TO THE SLOPES.

Buckle up your boots and start skiing! Thanks to the ski in/ski out location, the slopes are literally on the doorstep of the Lizum 1600. After an action-packed day in the Axamer Lizum ski area, guests can unwind in the hotel. All our 46 double rooms are furnished in a modern alpine style and offer a space for relaxation. A family room is also available. As well as a ski depot with lockable lockers, a gym and a wellness area, our climbing and boulder-tower is a special highlight.

All prices excluding local tax - € 2,- per person per night.

During the New Year's and Carneval's weeks arrivals and departures are only possible on Wednesdays and Saturdays.

Prices per person in a double room including: 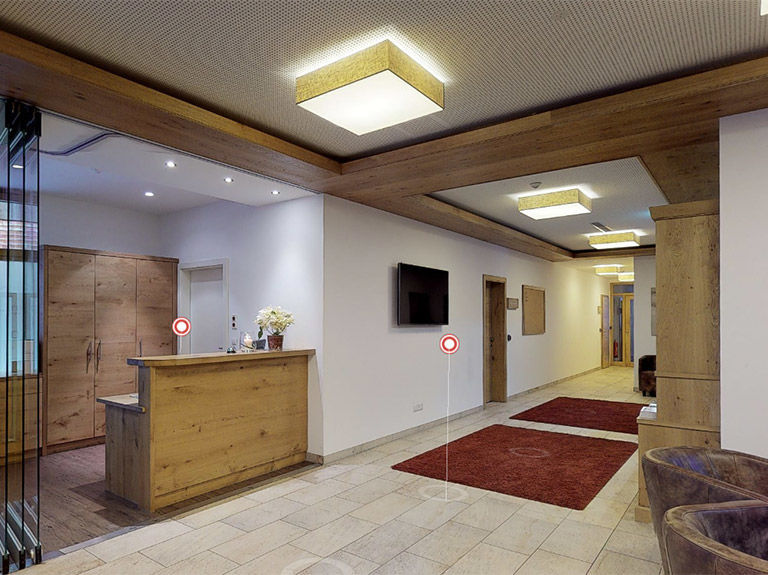 The Lizum 1600 as a wedding location

We look forward to your inquiry at hochzeiten(at)lizum1600.at

GOOD FOOD IN A PERFECT SETTING.

The comfortable atmosphere in our bistro bar invites you to drop in.

During winter timer "Der weisse Rausch” is open daily - skiers, tobogganists and ski tourers are always welcome to join us!

In the summer time we are only open to private parties. If you are planing your wedding or birthdayparty, our bistro bar "Der weisse Rausch" offers a pervect setting.

... was the title of the legendary skiing film by Arnold Fanck in the 1930s.

The plot is inspired by "A fox hunt on skis through the Engadin" in 1922: once again there is a fox hunt but this time the Arlberg ski expert, Hannes Schneider and Leni Riefenstahl are the foxes. The champion skier Walter Riml (2.05m tall) and Guzzi Lantschner (1.55m) play the two carpenters from Hamburg .Fietje and Tetje, who witness skiing and the "new-fangled stuff" for the first time and, of course, they have to try it. Tetje and Fietje were two figures from the Hamburg vaudeville artists, Wolf Brothers.

The film was not only a success in Austria but throughout the world.

AS CONVENIENT AS IT GETS

The Lizum 1600 is located in the Austrian ski resort of Axamer Lizum. Forget the ski buses, searching for a parking space and dragging the skis to the ski lift. Whilst others are still scraping the ice off the windshields of their cars, you will have already made the first turns on the freshly groomed pistes. It’s just a few steps from our ski depot up to the slopes and in no time you can reach the Schönenbodenbahn that takes you from 1600m to over 2300m in altitude.

From the first moment to the last, a pure skiing pleasure.

AXAMER LIZUM - THE "WHITE ROOF" OF THE INNSBRUCK OLYMPIC REGION

The Olympic Circus has twice been a guest in the Axamer Lizum (1964 and 1976) and the reason is easily explained: nowadays just like before, the snow conditions as well as the mountain panorama are deserving of a medal. The wintry alpine landscape with its 10 cable cars and ski lifts and 41km of perfectly groomed slopes is only 19km from Innsbruck.

Due to the altitude and the added snow, the Axamer Lizum is one of the snowiest ski resorts in Austria and not by chance is known as the "White Roof" of the Innsbruck Olympic region. Skiers or snowboarders, racing or pleasure skiers, freeriders or piste-bombers, in the Axamer Lizum there is something for everyone; and those not enjoying the top pistes can be found in the snow park, the Race Corner or raising the adrenalin levels in the spacious freeride terrain.

The Axamer Lizum not only offers sporting possibilities, there are also gastronomic delights awaiting the winter sport fans. In addition to the traditional huts in the ski area, the Hoadl Haus Panorama Restaurant at an altitude of 2,340m is especially inviting for a stop-off.

FROM INNSBRUCK TO THE SLOPES IN 30 MINUTES.

Whether plane, train or road trip, everyone benefits from the central location of the hotel right in the heart of Tyrol. The (ski)region Axamer Lizum is directly above the city of Innsbruck which has already hosted the Olympic Winter Games twice. Discover more on the official website of the Axamer Lizum.

Axamer Lizum parking lot – (only) way on the left – past Hotel Olympia – before junction follow sign „Kompetenzzentrum Lizum 1600“ – turn slightly right and take the road to Lizum 1600. – In wintery conditions you might need snow chains.

... can enjoy the breathtaking mountain panorama of the Axamer Lizum when approaching Flughafen Innsbruck airport. At the airport you have several possibilities to get to Lizum1600.

Rental cars...
... are available at Innsbruck airport. All leading rental car companies can be found there.

Public transportation...
... is an easy option to get to us. The timetable for the winter season 2015/16 will be available soon at ivb.at.

... couldn’t be easier. Just get off the train at Innsbruck main station and hop on the free bus to the Axamer Lizum. During the winter season the free ski shuttle has several scheduled runs a day in both directions.

You will find further information about the ÖBB train schedule at www.oebb.at.

... are the taxis of the Axamer Lizum. The taxi company Peterson can transport up to 4 people, Rental Cars Mayrhofer up to 8 people. Tommy’s Taxi additonally offers airport transfer.